Ghost9 is a South Korean boy band working under the label of Maroo Entertainment. With their debut EP, “Pre Episode 1: Door,” the group made its debut on 23rd September 2020. The current members of the team are Shin, Junhyung, Junseong, Kangsung, Prince, and Jinwoo. Dongjun and Taeseung are former members.

Here’s a detailed Ghost9 kprofiles of current and former members. 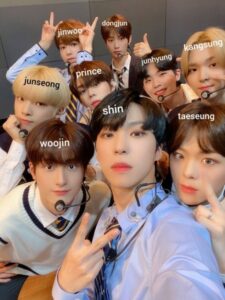 Shin is the main dancer and Sub-Vocalist of the band. His birth name is Kim Suhyun, and he was born in Seoul, South Korea, on 18th March 2000. In his family, he is the middle child with an older sister and a younger brother. He completed his education at Cyber University, and he also worked as a trainee in C9 Entertainment pre-debut.

Shin Ghost9’s height is 180 cm (5’11”), and he is currently 22 years old, according to his date of birth. Before his official debut as a Ghost9 member, Shin also worked as a part-time worker in a hotel. His hobbies are watching movies, playing computer games, and watching songs/dance videos.

Junhyung is the leader of the group. He was chosen as the main vocalist and dancer. His birth name is Son Joonhyung, and he was born in Seoul, South Korea, on 21st October 2000. Just like Shin, he also completed his education at Cyber University. Plus, he was a student of FNC Academy. Before his debut as an official Ghost9 member, he worked as a backup dancer.

Junhyung is 177 cm (5’10”) tall, and he is, too, 22 years old. Speaking of his personal preferences, he loves watching dramas and YouTube videos. He is a huge foody. He likes eating spicy food. As for his hobbies, he prefers playing sports, taking pictures, and listening to music during his pass-time.

Junseong is the lead vocalist and dancer in the group. His birth name is Choi Junseong, born in Seoul, South Korea, on 29th September 2002. He is the eldest child and has a younger sister in the family. Pre-debut, he worked as a Jellyfish trainee. Plus, he was also a former Joy Dance academy student.

Junseomg is 170 cm (5’7″) tall, and he is 20 years old. He is the mood maker of the group, though he was the last to join the line-up. He loves watching and playing soccer. His favorite pastime activities are studying different languages, watching animes and dramas, and collecting figures.

Kangsung is the rapper and lead dancer of the Ghost9 group. His birth name is Lee Kangsung, and he was born in Cheonan, Chungcheong, South Korea, on 8th August 2002. He completed his education at Gyeongin High School and was also a student at Joy Dance Academy.

Height of Kangsung is 175 cm (5’9″), and he is currently 20 years old. Before joining the Ghost9 team, he auditioned for ATeam and YGX Entertainment and passed the final rounds. His hobbies are playing basketball, watching busking and Netflix, and riding bicycles.

Prince is the lead dancer and sub-vocalist of the Ghost nine group. His birth name is Pasidh Vataniyapramote, and he is Thai by nationality. He was born on 10th January 2003. Prince has two brothers in his family. He completed his education at Concordian International School and was a student at Crescendo school of music.

Prince is 176 cm (5’9″) tall, and he is currently 20 years old. He is multilingual and thus can speak Thai, Chinese, English, and Korean. Prince prefers spending time alone, and he utilizes it by watching movies, playing the piano, drawing pictures, and playing with dogs.

Woojin is the stage name for Lee Woojin. He is the sub-vocalist, sub-rapper, and visual of the group. He was born in Seoul, South Korea, on 7th April 2003. Woojin is the middle child with an older sister and a younger brother. He completed his education at Eonnam High School and has been trained for nine months.

Woojin is the tallest member of the group as he is 183 cm (6′) tall. He has a quiet and straightforward personality. In an interview, Woojin said he would have been a physical education teacher if not an entertainer. He likes watching movies, listening to music, reading books, and playing soccer.

Jinwoo is the maknae of Ghost9 and also the lead dancer and sub-vocalist. His birth name is Lee Jinwoo. He was born in Cheongyong-RI, South Korea on 13th September 2004. In his family as well, he is the younger one and has an older sister. He completed his education at Hanlim Multi Arts School and was trained for only five months.

Height of Jinwoo is 179 cm (5’10”), and he is 18 years old. He is the messiest member of the group, and he also sleeps a lot. His favorite pass time activities are listening to music and watching soccer and movies.

Dongjun was the vocalist, rapper, and producer of the group. His birth name is Hwang Dongjun, and he was born in Incheon, South Korea, on 7th September 1999. He is the eldest in his family and has a younger sister named Hwang Jimin. He completed his education at Global Cyber University in the Department of Broadcasting and Entertainment.

Dongjun is 180 cm (5’11”) tall and is currently 24 years old. He is fluent in English and has a 4D personality. He listens to music, watches movies, and plays games during his pass time. On 5th September 2021, he officially left Ghost9.

Taeseung was the stage name of Lee Taeseung. He was the main vocalist of the band. He was born in Seoul, South Korea, on 19th December 2003. In his family, he is the eldest son and has two younger sisters. He completed his education at Apgujeong High School, and he was trained for three months before joining Ghost9.

Taeseung was the tallest member of the group as he was 186 cm (6’1″) tall. Interestingly, he claims to have a license to be a mint chocolate lawyer as he loves eating mint chocolates. His hobbies are playing games, dancing, singing, and studying reptiles and fashion. On 5th September, he left Ghost9 along with Dongjun.

The information provided here is sourced from multiple online available interviews of Ghost9 members and the official site of Maroo Entertainment. Ghost9 Kpop is an emerging group gaining popularity among K-pop fans. With their chart-bombing performances and charismatic presence, Ghost9 will surely reach the heights of stardom in the coming time.