No doubt, Korea is blessed with various Kpop idols male who are not only talented but attractive too. They have won several hearts with their massive talent, dazzling attractive looks, and stunning personalities, and it is nearly hard to pick up one as the most handsome idol in the Kpop industry. Yet, there are some idols who stand out compared to other idols.

Who is Most Handsome Kpop Idol? – Find out here!

Here is the list of the 10 most handsome and unforgettable Kpop male idols. 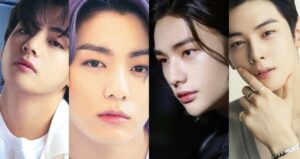 When it comes to the BTS members, V stands as the most handsome kpop idol. Kim Tae Hyung has an attractive personality, astonishing charm, and heart-stealing eyes which have made many fans out there crazy about him. His deadly looks, sexy voice, and killer eyes take away all the attention even when the entire group is performing.

Sehun is the next member of the list. Popular as the Maknae of the EXO group, Sehun is famous for his everlasting cuteness. When dancing on the stage, he prefers to focus on his facial expressions and emotions that make his dance moves attractive compared to the dancing techniques.

Here is another member from the BTS group. Jungkook ranks in the 3rd position in the list of most handsome kpop idol. He is the youngest member of the group who is not only popular in Korea but in other countries too. His dance moves, raps, and attractive personality have always grabbed the attention of the viewers.

Next on the list is Jin from BTS. Jin is also famous as the “third pretty guy from the left” in the group. Jin is famous for his talent and vision. His appearances apart from the BTS albums are very viral on the internet. And hence, you can’t stop yourself from getting away with his stunning visuals.

Baekhyun has always remained in the limelight for his childlike, cute, and bright personality with a charismatic voice, and powerful stage presence. The main vocalist of the group is quite talented and is also looking to obtain success in his acting career. He can also mimic others very well.

Taemin is the most handsome man in kpop industry from SHINee group. He made his debut at the age of 14 as the vocalist of the group. Apart from this, the handsome idol also initiated his solo career in 2014. He has gained tremendous fame by his mind-blowing choreography.

Also dubbed as the face genius, Cha Eunwoo is a popular member of ASTRO on the list. Since he first made his appearance on stage, he has been praised for his amazing visuals and charming personality. Some also claim him to be sexier as he matured.

Mingyu has grabbed all the attention compared to other members of the SEVENTEEN group. His fans love his adorable food looks and stunning visuals. He has always received positive responses for his work.

Hyunjin is also picked as the most handsome Kpop idol by TC Candler. Ever since he debuted with Stray Kids, he is being appreciated not only for his looks but his amazing performance on stage.

Last but not least, Jake is also one of the most popular handsome faces in the Kpop industry. He is not only talented but has caught the eyes of his fans for his handsome personality and visuals. His beautiful eyes and side profile have helped him effortlessly win various hearts.

So, which is your favorite handsome Kpop idol from the list?