BTS Suga is a South Korean rapper, music composer, producer, and songwriter known to his admirers and detractors as the “Savage King.” While he and his crew are currently at the pinnacle of their musical careers, he was not always as powerful and composed as he is now.

Min Yoongi, aka BTS Suga, was born and raised in an impoverished home. And his parents never encouraged him to pursue his dream of being a musician. BTS Suga had to overcome many challenges, like surviving on two dollars and ultimately defying his father’s desires. This caused a rift in their father-son connection, which added insult to injury to his already tragic situation. 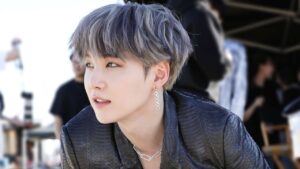 Although nothing is known about the idol’s parents, we know that the present BOP rapper’s parents came from a poor beginning. The family of five had to pick between eating a full course dinner and sleeping on an empty stomach regularly. In several interviews, the idol has claimed the same, particularly why his father opposed his debut as a Kpop Idol.

Suga said in an interview, “He didn’t Understand Rap Music.” Understandably, He was opposed to what I was doing. Suga explained that he could work harder because he had a better understanding of where his parents came from. “Now I see why my parents were so opposed to what I was doing. However, this pushed me to work harder since I had something to prove. As a result, I had to provide proof to my worried parents. As a result, I pushed myself to work even harder,”

Check out – How Many BTS Movies Are There?

Although some fans were outraged by Min Yoongi’s parents’ rejection and resistance to his son’s desire for rap and music, the musician went on to explain why his parents did so. He said For approximately a half-year, my family opposed me. My father is a very conservative guy. And because my parents had been through so much, they didn’t want their children to go through it as well.

So, in the end, BTS Suga’s father merely wanted his son not to have to live in the same conditions as them. As members of an older generation, they automatically associated public service positions with a more secure way of life. They only wanted the best for their two kids, and as a result, they acted hostilely against their younger son.

Suga’s parents attended a live performance by BTS a few years after the group’s debut. When Suga noticed them in the audience, he sobbed and bowed to them. Several BTS fans remember this live performance because it was an emotional occasion for the musician.

Suga broke down in tears as he saw his parents bowed down on his knees in front of the entire audience as a sign of respect. Media captured this on live video, and it was favourably received by his teammates, millions of admirers, and even his parents. The two burst into ecstatic tears, both very pleased with his son’s accomplishments with his squad of seven at the time, proving them wrong.

As a result, the resentment washed away in the end, and the subtle divide between the father and son connection has been visible ever since. Apart from BTS and ARMYs, suga father, mother, and brother are the next most important pillars of his life, and he believes they will always be at his side throughout his life. Suga’s parents, on the other hand, have always backed him in his endeavors as a singer, composer, and producer. He made solo songs, worked with American musician Halsey, and won honours with his BTS brothers.

Overall, suga’s dad cleared all the problems. BTS has had a successful year thus far. Their song Butter dominated the Billboard Hot 100 for eight weeks before being passed on to their most recent hit, Permission To Dance. Their song Dynamite was nominated for a Grammy, but they did not win. With only a few months until the Grammy nominations are released. Rapper Suga emphasized his ambition be nominated and bring the trophy back to his homeland of South Korea.